On September 11, 2010 at a ceremony held at Blackman United Methodist Church, scout Will Rose was awarded his Eagle badge.
To earn Scouting’s highest award, Will had to earn twenty-one merit badges, serve as a leader in his troop, and complete a major community service project.  For his project, Will planned and lead a team in erecting a lighted flag pole and building a memorial guardian at the Almaville Fire Station.
Will has been a member of Troop 422 for seven years.  Before becoming a Boy Scout, he was a member of Cub Scout Pack 842, earning the Arrow of Light, which is Cub Scouting’s highest award.
Will is the thirty-ninth scout from Troop 422 to earn the Eagle award. 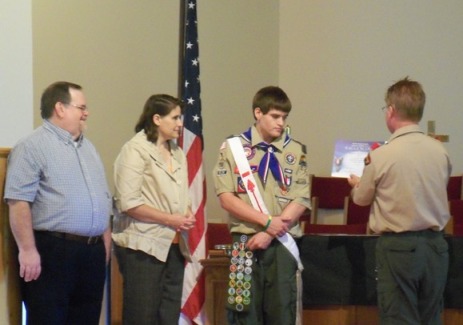 With parents Mike and Melody Rose onlooking, Will Rose is presented his Eagle certificate by Scoutmaster Charles King.

This entry was posted in 2010 News. Bookmark the permalink.