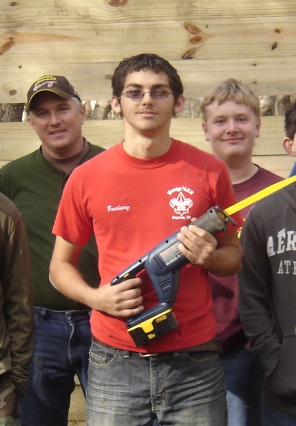 Scout Zachary Hodges successfully passed his Eagle Board of Review on Wednesday, April 21, 2010, and has become the thirty-eighth Eagle scout from Troop 422.

For his Eagle project, Zachary organized and lead a team of scouts and adults in the construction of a bird watching blind on the unfinished nature trail at Gregory Mills City Park in Smyrna.

Zachary has been a scout in Troop 422 since 2003. Before Boy Scouts, he was a Cub Scout in Pack 842, earning all his ranks and the Arrow of Light.

Zachary will be graduating from La Vergne High School this month, and will be attending Middle Tennessee State University in the Fall, where he will study to enter the Recording Industry program in the Mass Communications Department.

Zachary is the son of Michael and Dianna Hodges. He is also the younger brother of Eagle Scout Joshua Hodges.

This entry was posted in 2010 News. Bookmark the permalink.