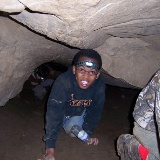 April 11, 2011 – Due to the devastating effects of White Nose Syndrome on the bat populations in eastern United States caves, Troop 422 is not promoting caving at this time.

Jimmy is back to report on the latest High Adventure, our Lost Creek Cave Overnight.  We hiked to the cave in the dark.  About 5 minutes inside the cave Nate asked “When are we going to get to the cave?”  We told him to shine his light up, then he could see we were well into the cave already.  That is how big the entrance area is.  In some places the ceiling was 80′ high.

Camping in the cave is by first come, first serve.  We were second.  Our favorite camping spot was already occupied by Boy Scout Troop 313 from McMinnville.  But they were very nice and made room for us too, a decision they may have later regretted cause our schedules did not mesh smoothly.  They wanted to sleep normal hours and we wanted to go crazy.

We had 28 people and a dog, Darkness, in our group.  Despite really tight sleeping quarters, I managed to wake up about 20′ from where I went to sleep.  And Thomas was asleep on my pad.  No problem.  Did I mention the snoring echoing around in the cave?  Bet you can still hear it.

But I’m really getting ahead of myself.  Because for hours before we went to sleep, we explored the cave high and low, walking and crawling.  Angelo, our Park Ranger, took us all over that cave including the waterfalls, bottom and top.  The top ledge was dangerous so we had to be really careful not to slip.  Falling in a cave is never a good option.  The cave was wetter than we had seen it before, lots of rain recently, so the waterfalls were really roaring.  Everywhere the cave was dripping or gurgling.  Music to my ears.

We saw a few bats hanging around but none flying.  Check out our pics to see us slide down the rock slide.  There were places we all had to help each other climb up or over.

One time Angelo, Rose, Kevin and Chris went on ahead leaving all the rest of us in a big room to rest.  They splattered the cave walls, floor and ceiling with stuff out of glow sticks.  Then they came back and got us.  We got to walk thru these passageways with no flashlights allowed, just by the light of the thousands of splatter dots everywhere.  Magic.  It was like floating thru space with stars everywhere up and down lighting our way.  Darkness was also speckled with the same stuff so some of the stars kept moving around.  It was awesome.  Thanks Angelo.

Nearly all our Scouts did the cave crawl through some tight, sometimes muddy passageways.  Daniel was wearing some high top boots that were kinda slippery so we would be walking side by side up a muddy incline and suddenly he would plop flat to the ground and slide down the hill.  Then he would pop right back up and we would continue on to the next muddy incline.  I got better traction with my regular shoes even though the soles were falling off and had to be duct taped on.  But Daniel could walk through deeper water that I had to walk around.

After the cave exploration and crawl, we made our way back to camp.  Some were already asleep, especially Troop 313.  No time for ghost stories.  We tried to be quiet but we did cook beef stew for supper.  We had big loaves of french bread that you could just rip off a chunk, and PB & J.  Dad was afraid no one would like the stew, it was kinda spicy, but Daniel had at least 5 servings.  I did the cooking and lots of people ate most of the 2 gallons of stew.  It was nice to have a hot meal in the cold, damp cave.  But it made me really sleepy so I crashed and Dad did clean up.  Thanks Dad.  Washing dishes is even harder when you have no dishwater.

Saturday morning Logan prepared breakfast for all that included Hot Chocolate, Spiced Cider, different flavors of Oatmeal and Grits.  And we had more french bread.  We cooked both meals with our backpack stoves.

Then it was time for Climbing.  Angelo taught us about different ropes, how to inspect, some knots, and lots of info about rappelling, our activity of choice.  Then we proceeded back to the waterfall area where they set up ropes, etc for rappelling.  It gets kinda boring waiting for the ropes and equipment to get all setup, Ian fell asleep on a big rock, but it is worth the wait to get to rappel 40′ down next to the waterfall.  We had at least 15 different people rappel, some several times each.  I was first over the edge.  Rappelling is awesome.

When we finally emerged from the cave, most people had already left.  That left only a few for our picnic in the sun.

This entry was posted in 2008 News. Bookmark the permalink.