Troop Backpacks at Walls of Jericho 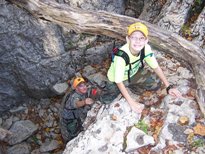 On the weekend of October 20th, 2007, the scouts of Troop 422 backpacked into the Walls of Jericho, a remote area on the Tennessee – Alabama border south of Winchester. Known as “the Grand Canyon of the South”, the Walls of Jericho are reached after a 1000 foot descent into a deep valley, then ascending another 200 feet in a side canyon. After making this steep trek, the scouts were awarded with a wondrous sight, as they explored the natural amphitheatre, caves, sinkholes and pools of the Walls of Jericho.