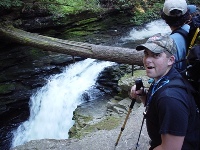 On the weekend of April 21-22, 2007, a group of scouts and leaders with the Badger Patrol of Troop 422 backpacked the Fiery Gizzard trail at the South Cumberland Recreation Area. Leaving Smyrna early on Saturday morning, the backpackers drove to the Grundy Forest State Natural Area outside Tracy City. Hitting the trail at about 8 AM, the team hiked down into Fiery Gizzard, generally following the Fiery Gizzard Creek.

Along the 3.7 mile hike to the bottom of the gulf, the scouts saw many natural wonders, including rock shelters, a 500 year old Hemlock tree, natural waterfalls and pools, 20 foot tall stone columns called Chimney Rocks, and house sized boulders called the “Fruit Bowl”. They ate lunch at a cool, shady spot along the bank of the creek. Along much of the trail, it felt more like rock climbing than hiking, as the patrol had to trek across long stretches of loose stones while climbing up and descending down several hills in the gulf. They began to understand first hand why this trail is considered one of the more difficult in Tennessee.

However, at the bottom of the gulf, the scouts faced their biggest challenge, a 500 foot ascent over 0.5 miles to the eastern rim of the gulf. Patience, several rest breaks, and the hiking technique of “caterpillaring” were required to get the team to the top. However, the reward for the ascent was the Raven Point campsite, just a tenth of mile from the rim.

After setting up their campsite, the scouts hiked down the rim trail to Anderson Creek, where they used their water filters to replenish their water supply. They then walked the half mile to Raven Point, a spectacular overlook that provides a 270 degree view of Fiery Gizzard below.

After a hearty dinner in camp, the scouts retired for a well-earned sleep by 8 PM that night.

Arising at 6 AM Sunday morning, the patrol ate a quick breakfast, struck camp, and were on the trail by 7:15. Luckily, the return hike was not as difficult, as the scouts took the Dog Hole trail that mostly stayed on the eastern rim. They made good time, with one long stop at the Yellow Pine Cascade for fresh water. By 10:30, the patrol had returned to the Grundy Forest parking lot, tired but proud after a challenging weekend.