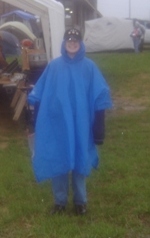 On the wet but eventful weekend of April 13-14, 2007, the scouts of Troop 422 made many contributions at Boxwell Scout Reservation during Beaver Day and the Trail of Tears District Cub and Family Campout.

Although a planned monkey bridge organized by Dale Bryson was cancelled due to the weather, the Viking patrol provided a great deal of assistance to the Cub Scouts at their Cub and Family Campout at Camp Stahlman, including being the color guard for the opening and closing flag ceremonies, and running a rope fusing and knot tying station. (Anytime you give cub scouts a chance to burn things in a controlled manner, you’ve got a hit!) Also, Pine Tree patrol scouts Reed and Bradley provided assistance directing the arriving cub scout families to the correct campsite on Friday night.

While the Vikings spent much of the day working with the cub scouts, the other patrols were busy helping with Beaver Day tasks. The troop’s primary goal at Beaver Day was to get Stahlman site 11 (the troop’s traditional site) ready for summer camp. With the number of new scouts and leaders attending this year, the site needed an additional nine platforms. Tim Shaw coordinated the site expansion with the Boxwell rangers and directed the effort. Scouts and leaders from the Predator patrol worked in the maintenance yard to construct new platforms, while the Viking patrol rearranged the existing platforms in the site to make room for the new platforms.

Given the large number of scouts and leaders from the troop, other tasks were also accomplished. The Cobra patrol, working with Stanley Dunn and Billy Necessary, cleaned up the Stahlman kitchen. The Pine Tree patrol painted the doors to Showerhouse # 2.

After supper. the troop welcomed one new scout, Jimmy, into the troop at the Webelos crossover campfire. Several other scouts in the Cobra patrol, who joined in January, also participated in the crossover. Later that evening, four scouts (Dyron, Luke, Kyle, and Zach) and two leaders (David Kelley and Michael Hodges) were tapped out by the Order of the Arrow.

Although the weather caused the campout to be cut short, it was still an eventful and productive weekend for the troop.