Boy Scouts and leaders across West Michigan to remember Eagle Scout and the United States’ 38th President with an Honor Guard of Local Scouts. 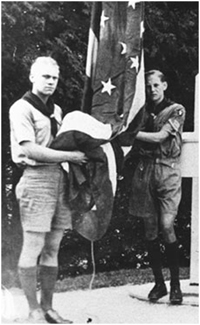 GRAND RAPIDS, Mich., Dec. 27 /PRNewswire/ — More than 30,000 Scouts and volunteers with the Gerald R. Ford Council of the Boy Scouts of America join the nation in mourning the loss of the nation’s first Eagle Scout Vice President and President with the news that President Gerald R. Ford has died at age 93. For three generations he inspired scouts with his leadership and legacy not only in southwest Michigan but across the nation.

To honor the former President, the Gerald R. Ford Council will be presenting a cordon of Eagle Scouts and an Eagle Scout Honor Guard as the family returns “home” to downtown Grand Rapids, Mich. In addition, over 5,000 Scouts and leaders of all ages will be lining the processional route on Fulton Street in front of Davenport University the day of the service.

Board member and former National Board Member of Boy Scouts of America, Dick DeVos said, on hearing of the death of the President, “President Ford lived by the Boy Scout Oath that calls on a Scout to do his best to do his duty to God and country. He was among this nation’s most upstanding citizens, leading our democracy through one of its most trying times while helping to heal America. As a former Boy Scout and friend of President Ford’s, I saw him live the values of Scouting, always doing his best, always keeping his moral compass pointed north. It made him a strong leader, a positive role model for young people all across this country, and while we celebrate his life we are saddened to have lost his company here on earth.”

Young Gerald R. Ford began his Scouting career on December 17, 1924, when he became a member of Troop 15, sponsored by the Trinity M.E. Church in Grand Rapids, Mich., and earned the Eagle Scout rank in 1927 with 26 merit badges. In 1970, he received the Distinguished Eagle Scout Award “for his service to the Nation and community.” He received the Scouter of the Year Award on December 2, 1974, from the National Capitol Area Council, Washington, D.C.

While President of the United States, Ford drafted a letter that acknowledged the importance of Scouting in his early life; in it, he wrote, “My early years as a Boy Scout were invaluable in helping to shape the course of my later life … The three great principles which Scouting encourages — self-discipline, teamwork and moral and patriotic values — are the building blocks of character. By working for these principles, those who belong to and support the Boy Scouts of America add greatly to the vitality of our society and to the future well-being of its people.”

Michael D. Sulgrove, Scout Executive of the Gerald R. Ford Council, Boy Scouts of America, remarked, “President Gerald R. Ford never forgot his Boy Scout Oath and Law! I believe, in fact, that it was this Oath and Law that guided his daily actions and thinking as our nation’s leader. President Ford was often “blamed” for being too much of a Boy Scout — a fact to which he quickly retorted by saying “more people need to act like Boy Scouts.” Our Council will forever be named in honor of this great leader. In our nation’s darkest hour of doubt and fear in the office of our President — it was an Eagle Scout who renewed our faith!”

The Gerald R. Ford Council of the Boy Scouts of America has been serving area youths, families and the community since 1912 and is comprised of 480 units and more than 30,000 boys and girls involved in Scouting and Venturing programs from a 12-county area including Allegan, Berry, Ionia, Kent, Lake, Mason, Mecosta, Montcalm, Muskegon, Oceana, Ottawa and Newaygo. Annually, more than 7,000 volunteer leaders administer more than 125 specialized programs and activities. Scouting builds character and strong communities; visit www.bsagrfc.org for more information.

The Boy Scouts of America is composed of 1.2 million volunteers working together for the sole purpose of helping its more than 5 million kids succeed in life. The Boy Scouts of America’s 95-year history is a testament to the enduring values of the Scouting program. For more information about Scouting, as well as opportunities to volunteer in area communities, visit www.scouting.org.

This entry was posted in 2006 News. Bookmark the permalink.